Zapata Swamp (in Spanish, Ciénaga de Zapata) is located on the Zapata Peninsula in the southern Matanzas province of Cuba. Within the swamp there are numerous places to target for birding, and these are described below. In total, this area is over 6,000 km² and is the largest protected area in Cuba, and also the Caribbean! The swamp is known for its size, as well as for being the best preserved wetland in all of the Antilles, designated as a “Wetland of International Importance” by the Ramsar Convention on Wetlands in 2001.

Zapata Swamp has become one of BirdsCaribbean’s favorite Cuban birding destinations. It’s just a 360 experience of what birding is all about, from the scenery to the bird species to the adventure of getting there and out again. Be prepared to trek through thigh-high water to earn some of the best birds of the swamp, the Zapata Wren and Zapata Sparrow. 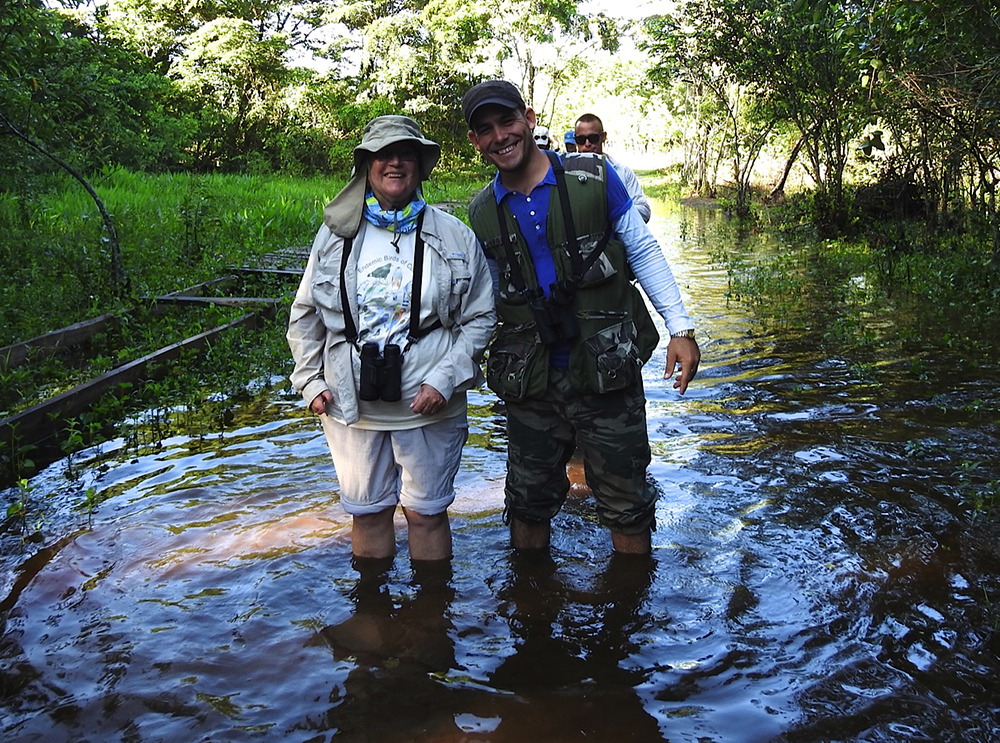 Nature enthusiasts will be excited to know that a trip to Zapata Swamp can also produce sightings of the Endangered Cuban Crocodile (Crocodylus rhombifer) and Vulnerable American Crocodile (C. acutus). The Critically Endangered Dwarf Hutia (Mesocapromys nanusoccur) is also known to this area, though a sighting would be extremely rare. Globally threatened sea turtles nest on the beaches, and the area supports the largest remaining population of the endemic, endangered Cuban gar, Atractosteus tristoechus, considered to be a living fossil.

Cueva de los Peces, for great views of the gorgeous Blue-headed Quail Dove and other endemics. The site is named for one of Cuba’s largest underwater saltwater caves, which swimmers are free to enjoy; there is also swimming and snorkeling at the lovely reef just off the beach.

Santo Tomas, for birding from the water via pole-powered boats. This area, with its sawgrass tussocks, is the type locality for Zapata Swamp and a great place to see the Zapata Sparrow and Zapata Wren. Also be ready to spot species such as the White-crowned Pigeon, Great Lizard Cuckoo, Smooth-billed Ani, Cuban Tody, Cuban Bullfinch, and Purple Gallinule.

Zapata Swamp is home to 40 biome-restricted birds, including 17 globally threatened species, and 23 of the 27 Cuban endemic species! See list below.

The only endemics not found here are the Cuban Kite, Cuban Solitaire, Cuban Gnatcatcher, and Oriente Warbler. Note the highly sought-after endangered Zapata Wren (Ferminia cerverai) and Zapata Rail (Cyanolimnas cerverai) are endemic to the site. The area supports large concentrations of waterbirds, including breeding populations of Sandhill Crane (Grus canadensis nesiotes) and Wood Stork (Mycteria americana). This is the last site in Cuba where the Critically Endangered Bachman’s Warbler (Vermivora bachmanii) was observed, in 1964. The Zapata Swamp is also visited by 65 species of birds during their migration from North America through the Caribbean to South America.

Using the National Highway, travel east 142 km from Havana until you reach an exit that turns off to the right (south). After 8 km, this road enters the Zapata Swamp, and 22 km later you reach the town of Playa Larga.

If approaching from the east, the main entrance is by Yaguaramas (Cienfuegos province) via the Playa Girón road.

There are three government owned hotels within the greater Zapata area:

Around Playa Larga, the proven best accommodation options are “Casas particulares“, which are private houses that rent rooms (and sometimes the entire house). They have better conditions and offer much better services than most of the hotels. Also, hosts can help larger birding groups find additional casas nearby for additional rooms. The best location to book a casa particular is in the town of Playa Larga. This location offers the closest access point to all of the different birding trails, and also offers nearby amenities such as a bank, currency exchange office, telephone company office, and a medical clinic.

Ernesto and Tania both lead birding tours in partnership with BirdsCaribbean. Profits from these tours are directed straight to bird conservation projects throughout the Caribbean.