The Asa Wright Nature Centre (AWNC) is a biodiversity hotspot located in the heart of the Arima Valley Forest and is known to be the first nature centre in the Caribbean. There is something for everyone at AWNC but with the vast number of bird species, it can easily be considered a birder’s paradise.

AWNC has recorded over 180 bird species on site. On their verandah alone, one can spot around 40 species on an active morning. The site is also home to the Dunston Cave which is one of the most accessible sites for viewing the spectacular Oilbird! The site is located in a lush tropical forest habitat with a wide variety of bird species and in general a significant level of biodiversity that includes at least 23 bat species. Our camera traps have recorded at least two different Ocelots on several occasions together with Red-brocket Deer, Tamandua, Tayra, Prehensile-tailed Porcupine and Silky Anteater.

Although many of the birds can be seen from the main house verandah, guests are encouraged to take tours along their trails which can highlight many of the forest species.

The primary touring trail is known as the Discovery Trail but in total there are 8 trails on site which overnight guests can access freely. Highlights of the general tour include both White-bearded and Golden-headed Manakin Leks and perched, calling male Bearded Bellbirds. Visitors also have access to their natural clear water pool and can enjoy a great meal in the dining room.

Trinidad will give you a taste of what birding is like in South America, as it has several species that can also be found on the mainland. Trinidad was once a part of South America and still sits on the South American continental shelf, but it is commonly included as a Caribbean island.

In addition to up to 12 species of hummingbird regularly found on the property, including the dazzling Tufted Coquette, target birds include both Ornate and Black Hawk-Eagles; Oilbird, Collared, Green-backed and Guianan Trogons; Channel-billed Toucan and the endemic Trinidad Motmot, Bearded Bellbird, both Golden-headed and White-bearded Manakins, Turquoise and Bay-headed Tanagers.

It is quite possible to see up to 70 species within the grounds in a single day.

The Asa Wright Nature Centre is located on the Arima Blanchisseuse Road at the 7 and 3/4 mile mark. To get there, you can take a left turn off the Churchill Roosevelt Highway onto Demerara Road. This road then leads into the Arima By-Pass and eventually the Arima Blanchisseuse Road. The driveway to the Centre is on the left side of the road. The resident entrance fee per person, for a day visit at the Centre is TT$50 for adults and TT$25 for children 12 years and under. The non-resident fee is US$20 for adults and US$10 for children 12 years and under.

Within the Centre grounds, there are 25 twin and single cabins plus another two bedrooms within the Main House and is a great place to spend a few days. Indeed to see all the amazing birds here, you will need to spend at least one night! There is, however, one restriction. The principal mission of the Centre is conservation and protecting the local environment. To be able to visit the Oilbird cave, one must spend a minimum of three nights. For more information about the lodging, visit their website. 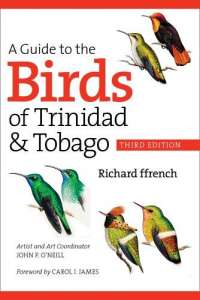