The Cockpit Country is Jamaica’s largest remaining contiguous rainforest. Fractured karst, and collapsed caves and sinkholes, have left the Cockpit pocked and pitted. Pocks (the cockpits themselves) can be as deep as 400 feet in places. Each cockpit is separated from the surrounding pits by steep ridges.

Cockpits are humidity traps; rarely do pits drop below 100% saturation. A spectacular diversity of life has evolved within this region, much of which is endemic to the region itself or to Jamaica as a whole. Some plant species, for example, are restricted to a single cockpit. Endemic birds such as the Red-billed Streamertail, Jamaican Lizard-cuckoo, Jamaican Blackbird, Ring-tailed Pigeon, Yellow-billed and Black-billed Parrots, and the Crested Quail-dove still haunt this isolated region.

The endemism in Jamaican birds is impressive. The adaptive radiation in land snails is overwhelming, with each cockpit a petri dish for land snail evolution. According to the Windsor Research Centre,

G. Goodfriend and G. Rosenberg have extended the number to 555 valid species [of landsnails], of which 499 (90%) are endemic to the island. Most of these species have very limited ranges and often do not occur across more than 1 to 4 parishes. The village of Auchtembeddie, on the southern periphery of the Cockpit Country, alone hosts 87 species of land snails, of which 69 (79%) are endemic – one of the highest densities of endemic land snails in the world.

Terra rosa soil settles to the bottom of each pit. The soil is blessedly fertile and friable, and local residents (the descendants of slaves and of the Maroon) have cultivated sweet potatoes, taro, and yams here for countless generations. The residents of the Cockpit Country, no more than 5000 in total, maintain a close link to their African heritage through their foods. Nowhere is this more obvious than in the Cockpit Country.

Now Cockpit Country is threatened by both short-term and long-term threats. The terra rosa soil in the pits is rich in bauxite. The aluminum industry would like to mine this ore, stripping each pit of its bauxite and its heritage.

The long-term threat is climate change. The risk is from changes to rainfall and humidity. What happens within each pit when confronted by too much or too little rainfall? What is the possibility of a lower average humidity?

Now is the time to visit the Cockpit Country, and see for yourself this incredible landscape and the abundant diversity of plant and animal life. By visiting you will be adding value to the notion that the Cockpit Country can support sustainable livelihoods and bring economic benefits to Jamaica for far longer than what can be achieved in the short term through mining.

Click here for a pamphlet-sized checklist for the birds of Cockpit Country. 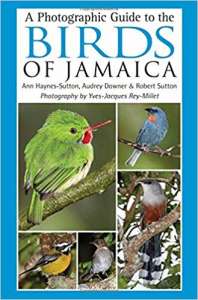