The Sierra de Bahoruco is the southern-most mountain range on Hispaniola, located in southwest Dominican Republic. The range is part of the Massif de la Selle-Jaragua-Bahoruco-Enriquillo Bi-national Corridor. The vegetation is a diverse array of forest types across a wide variety of life zones. The area is also an Important Bird Area, supporting 32 (of the 34) Hispaniolan Endemic Bird Area restricted range species.

Created in 1983, the National Park spans 112,448 ha (277,964 acres) and contains several good locations for birding on the northern and southern slope of the Sierra.

Southern Slope of Sierra de Bahoruco
The southern slope of the Sierra de Bahoruco National Park is served by an excellent paved road that was built by the Alcoa company for bauxite mining operations. The Alcoa road climbs steadily from sea level through dry broadleaf forests, until reaching the now inactive open pit mines near Las Mercedes and a national park entrance gate. Beyond the gate, the road continues to gain elevation, reflected in the changing habitat. The broadleaf forest becomes moist and then transitions into pine forest at about 1,100 meters in elevation.

At kilometer 26 (745 m elevation), look for another entrance on the left which descends into a very nice moist broadleaf canyon. Here you may find White-fronted Quail-Dove, Ruddy Quail-Dove, both the Hispaniolan and Olive-throated parakeets, Narrow-billed Tody, Red-legged Thrush, and Antillean Euphonia. Bicknell’s Thrush has also been recorded here in winter months.

Continuing on the Alcoa road you enter the pine zone, and just after kilometer 30, look for a national park sign for La Charca. Look for Hispaniolan Emerald, Antillean Piculet, Caribbean Martin, Greater Antillean Elaenia, and especially Golden Swallow and Hispaniolan Crossbill, as well as several species of warblers in season. The Hispaniolan Parrot, Plain Pigeon, and Palm Crow are also frequently seen here.

Once well-into the pine zone, the road again levels off and the road forks. Straight ahead is a locked gate and to the right is another gate. An entrance fee is collected for those continuing on to the Hoyo de Pelempito Visitor Center. This is another place to look for the Hispaniolan Crossbills, as they come in to drink. The visitor center lies 10 km (6.2 miles) further on at the end of this road. This is a favorite spot to view Hispaniolan Parrots in the late afternoon. And if you happen to be returning down the Aceitillar road, listen carefully for the calls of the Limpkin and Hispaniolan Nightjar, and the eye-shine of the over-wintering Chuck-will’s-widow. 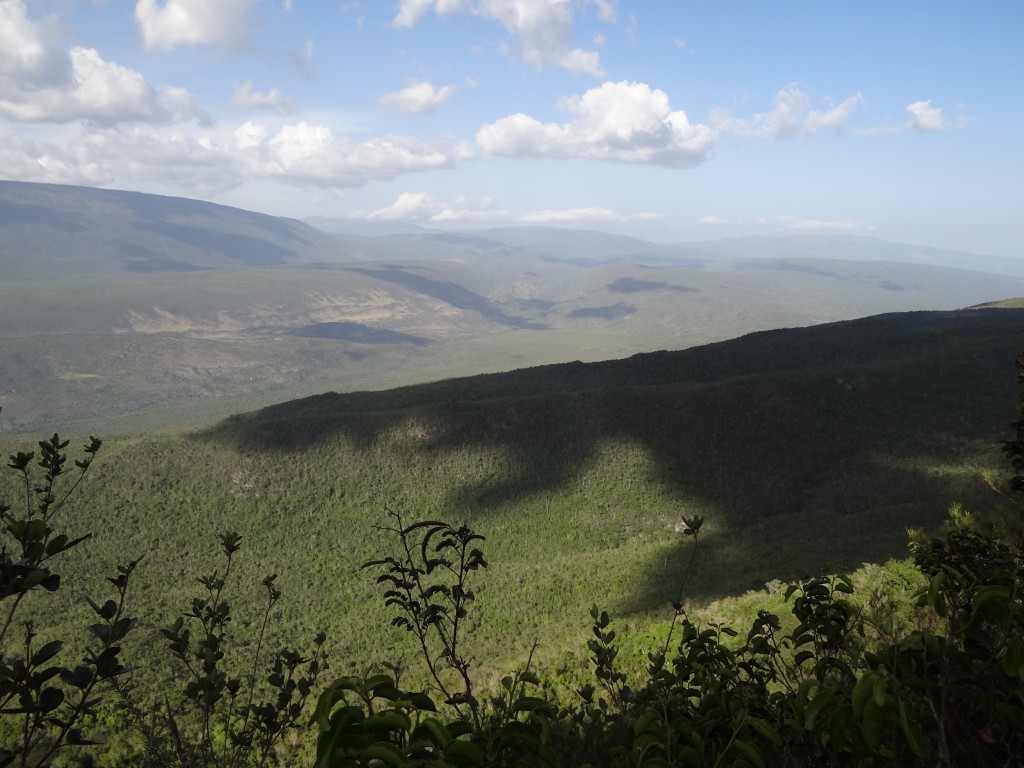 The Hispaniolan Lizard-Cuckoo, Antillean Piculet, and Hispaniolan Oriole are all common, and both species of Tody, Narrow-billed and Broanates at Villa Barrancolí, located just outside of Puerto Escondido.

From Puerto Escondido, you can opt to continue exploring the north slope of the range by heading to Aguacate and Zapotén. Beginning above Zapotén, this is the best site for high-elevation endemics such as the Scaly-naped Pigeon, White-fronted Quail-Dove, Hispaniolan Highland-Tanager, Hispaniolan Trogon, Green-tailed Ground-Tanager, Watern Chat-Tanager, Antillean Siskin, La Selle Thrush and more.

Aguacate is a moist broadleaf site and near the beginning of the cloud-forest zone. The Loggerhead Kingbird is frequently seen here, and it’s also a good place to look for endemic Hispaniolan Parakeets and the common Olive-throated Parakeet.

Villa Barrancolí’s close proximity to the Sierra de Bahoruco National Park makes it an ideal base camp for exploring the northern slope of the Sierra. One can begin by taking the Rabo de Gato trail, a 1-2 hour walk (depending on how good the birdwatching is!) starting at Villa Barrancolí.

The trail leads into riparian woods with a variety of plants and large trees. Those interested in plants, butterflies and birds will enjoy this habitat. All but two of the 32 bird species endemic to Hispaniola may be found in the Sierra de Bahoruco.

Villa Barrancolí is also at the beginning of the international highway (4×4 necessary), leading to Aguacate on the Haitian border and to Zapotén’s cloud forest. The road then continues on to Pedernales.

The Villa is owned and operated by Kate Wallace, who first came to the Dominican Republic as a Peace Corps volunteer in the 90’s. As a former teacher/naturalist with the Massachusetts Audubon Society, she quickly discovered the interesting variety of birds and soon joined a group of birders exploring the wild areas of the country. Part of her work was developing educational materials in parts of the country close to the national parks in the southwest and, in the process, she came to appreciate the opportunities available to visiting birdwatchers.

After the end of her service with Peace Corps, having fallen in love with the country’s flora and fauna, she decided to stay in the country to continue working with community groups and bird conservation. She began guiding in 1997 and has been active as a guide ever since, operating Tody Tours, which specializes in southwestern Dominican Republic. Kate is also active with the Sociedad Ornitológica de la Hispaniola and the Society for the Conservation and Study of Caribbean Birds.

Villa Barrancolí is equipped with five screened cabins with two beds in each. There is a bath house with hot showers and a common dining area. Meals can be arranged if desired.

Access
From the town of Barahona, take the main road north toward Santo Domingo until reaching a major intersection and the raod to Cabral, Duverge, and Jimani. Turn left and continue to Duverge (about one hour driving time). In Duverge look for signs for a left turn to Puerto Escondido. If you miss the sign, the turn is the fifth left after the gas station in town. Follow this road southward as it leaves town and seeon becomes dirt. Follow a small river bottom, and then steadily climb along an aqueduct through dry and dusty hills until reaching the small village of Puerto Escondido. The National Park house is on the right as you enter the village. Stop here to get a ticket for the park.

Continue straight through town until reaching a T-intersection. To reach Villa Barrancolí, and Rabo de Gato, turn left at the T and go past a chain-link fence surrounding the dam buildings. You will then turn right, cross a canal, and take the next right at a sign for Rabo de Gato.  Villa Barrancolí will be on your left.

Partners in the Dominican Republic

With special thanks to our partners at the Ruta Barrancoli